Kungfu.doc brings exclusively an interview with Juju Chan, Actress, martial artist, model, singer and writer, was born in the city of Hong Kong, on February 2, 1989. Known for the films Crouching Tiger Hidden Dragon: Sword of Destiny and recently Wu Assassins, both produced by Netflix.

Juju Chan kindly answered our questions and the interview

kungfu.doc: Since when did you start practice martial arts? What kind of martial arts did you practice?

JuJu Chan: I started at the age of 10 with Judo because that’s the closest martial arts school from my home. As I grew up, I also started learning Shotokan, Chinese Kung Fu, Taekwon-Do, Boxing, and Thai Boxing. After I got my Taekwon-Do black belt, I also got selected into the Hong Kong Team and started competing in Taekwon-Do, and not long after, got scouted by a Mauy Thai school to join their club and to fight for them in the Muay Thai Championships.

kungfu.doc:Why did you start training?

JuJu Chan: I got into martial arts because of my love for action films, since I was a kid. My dad loves action films. He would put an action movie on TV at home almost every night, and when I was a kid I loved to copy what I saw on TV. But of course it can be quite dangerous for a child to just copy martial art moves without any training. I remember one time I was copying a stunt that Jackie Chan was doing in Rush Hour, and I broke the glass of the coffee table at home. After that my parents sent me to learn martial arts.

kungfu.doc:What is your favorite weapon in the martial arts?

JuJu Chan: Nunchucks. I love how it will flow according to your movement with power and rhythm. I really love using them, and I actually kinda miss them when I’m away in places where I can’t bring them along.

kungfu.doc:What was your first performance as an actress?

kungfu.doc: Do you have other jobs, other than an actress?

JuJu Chan: I’ve worked in advertising and computer programming before.

kungfu.doc:Have you suffered any injuries during training or as an actress?

JuJu Chan: Yes, bruises are very common. I have also twisted my ankle many times from training. And, my right eye also got injured a few times. I got cut a few times on my right eye. People might not notice that, but my right eye is a little smaller than my left. I guess it’s from all the injuries and impact that I’d had throughout all the years on the same eye.

There’s always a risk doing action films and stunts. That’s why it’s important to be safe. Safety is so important. Also, when you are tired or your opponent is tired and you see something’s not right, it’s better to stop training than keep going because if you keep going and going and going and not adjusting something or just take a break, then injuries are more likely to happen.

I was shooting Crouching Tiger, Hidden Dragon Sword of Destiny, when on my last fight we needed to perform a sword fight. We actually shot a lot of takes and the last take was pretty good. Just for safety the director decided to do one more take, and of course that’s when I got injured. Maybe the other performer was tired, I don’t know why but she cut her sword earlier than before I finished my move and the sword hit right into my right eye. It was so painful. It was a really heavy sword that went straight into my eye. I got a huge bruise and I couldn’t see for 10 days. I really thought I was going to go blind but luckily, I didn’t. And luckily the take before was good, so they used that earlier take, and I was sent to the hospital. Then, 2 days after, we had our wrap party. A lot of people thought I wouldn’t show up because of my eye injury. But I made a very cute red butterfly eye-patch to cover my right eye and joined the party.

kungfu.doc:We would like to know in WU ASSASSINS on netflix, what was your biggest difficulty, easiness in the scenes. Did you have Stunts or did the scenes yourself ? What is the feeling of having done this series?

JuJu Chan: I played Zan on Netflix’s Wu Assassins – an elite martial artist and lieutenant in a triad, and a bodyguard to a high-ranking commander.

The role was originally written for a man.

I was actually reading for another role, for Ying Ying if you’ve seen the series.

The showrunner liked my look and wanted the skills I was able to bring on board. So he created a new female bodyguard role to the head of the San Francisco Chinatown Triad, Zan, in the show to replace the original male bodyguard/chauffer character.

The first two episodes were already written when I was casted, so I’m only a featured character in those episodes. But Zan blasts onto the show in the 3rd episode with an epic fight scene in the kitchen, and she grows from there. My favorite scenes are the kitchen fight in episode 3, Zan storming into the Police station in episode 8, and Zan taking charge in episode 9.

I do all my own fights and action in films. I have to say I am ALWAYS challenged by, and need to prove myself to, the stunt department. I have two things counting against me. One, I’m an actor not a stunt person. Stunt coordinators generally don’t trust actors with action. And two of course is me being a woman. You’d be lucky to find more than 2 stunt women in some of the biggest action films, and female stunt coordinators are extremely rare anywhere. In the end, it’s about earning the respect of the people you work with. With all the jobs I’ve worked on, by the end of the shoot I’ve ended up working very closely and well with the stunt teams.

Anyway, it’s very easy to be dismissed by some people when I want to take charge of my own action, but if I don’t push them myself, my experience has been they’d just put in a stunt women (or a small stuntman) to do an actress’s fights. And immediately it looks generic.  If you look at Jackie Chan, Sammo Hung, Donnie Yen and of course Bruce Lee, they all took charge of their own fights, and they all have a signature look to them. I see the need to do that for myself.

I certainly hope that by me doing this other stunt teams will be more open to listening to other women when they have opinions of action, whether it be for fighting, horse riding, driving or any other skill related film role.

kungfu.doc:Who are your idols in martial art and cinema?

JuJu Chan: For me my main influences were Donnie Yen and Jackie Chan. I think that’s why I do many types of martial arts. Before them Hong Kong films were always about “Chinese Kung Fu” being better. But if you look at Donnie Yen, his martial arts is very mixed. Jackie Chan was more about acrobatics and comedy, which I would certainly like to explore for myself. I loved the fact that Jackie was making American films too. I was also specifically influenced by Michelle Yeoh’s career path. I love what she’s done in bringing women to the forefront of action, not so much in Chinese cinema, which has a tradition of female action stars, but for how she made it into Hollywood. Before her, Bond girls were either love interests or a nemesis. I love that she brought to screen what was in essence a Female Bond from China. And she’s managed to carry on working in the industry as a woman of action! I hope that I’ll be able to do that.

kungfu.doc: For your Brazilian fans, what are your new projects and work?

JuJu Chan: An Indie film Hollow Point is now on Fox Asia and Netflix in Europe and UK. And martial arts comic book adaptation Jiu Jitsu with Nicolas Cage, filmed in Cypress coming out this summer.

JuJu Chan: Always follow your heart and your passion! As an artist, you never give up when you face difficulties or challenges. Stay positive and surround yourself with inspirational people. You only live once, so if being an artist is your passion, let no one stop you!

I hope to continuing improving my martial arts skills, and would love to play a cool super hero character in films that can show case my real skills.

Kungfu.doc would like to thank actress Juju Chan for the interview conducted by Instagram and Email. We wish you success in your next movies and still want to see you in a role as a super hero. 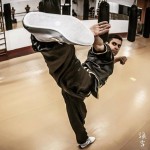 1 thought on “Interview with actress and martial artist Juju Chan”